In 1984, Congress passed the National Minimum Drinking Age Act, which required states to raise their ages for purchase and public possession to 21.  None the less, Teen access to alcohol continues to be reasonably easy.

The National Institute on Alcohol Abuse and Alcoholism, reports underage drinking is a serious public health problem in the United States. Alcohol is the most widely used substance of abuse among America’s youth, and drinking by young people poses enormous health and safety risks.

The consequences of underage drinking can affect everyone— regardless of age or drinking status. We all feel the effects of the aggressive behavior, property damage, injuries, violence, and deaths that can result from underage drinking. This is not simply a problem for some families—it is a nationwide concern.

Let’s review what constitutes “a drink” of alcohol:

In the United States, a standard drink is one that contains about 14 grams of pure alcohol, which is found in: 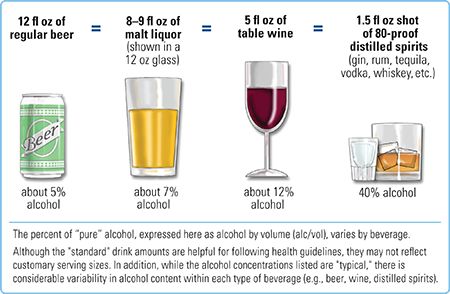 Unfortunately, although the “standard” drink amounts are helpful for following health guidelines, they may not reflect customary serving sizes. A large cup of beer, an overpoured glass of wine, or a single mixed drink could contain much more alcohol than a standard drink. In addition, while the alcohol concentrations listed are “typical,” there is considerable variability in alcohol content within each type of beverage (e.g., beer, wine, distilled spirits).

For example, “hard ciders,”  “hard lemonades” and other fruit flavored and sweetened alcoholic beverages preferred by underage drinkers are actually malt liquor beverages, which provide a larger quantity of alcohol to the drinker.

Many, many young people drink alcohol

People ages 12 through 20 drink 11 percent of all alcohol consumed in the United States.  And given the restrictions in the National Minimum Drinking Age Act – all but a very small portion of this activity is ILLEGAL in every state in the nation.

One more note, although youth drink less often than adults do, when they do drink, they drink more.

As adolescents get older, they tend to drink more. Prevalence of drinking by boys and girls is similar, although among older adolescents, boys binge more than girls.

SOURCE: Center for Behavioral Health Statistics and Quality. 2013 National Survey on Drug Use and Health Public Use File

What is “binge drinking?”

For adults, binge drinking means drinking so much within about 2 hours that blood alcohol concentration (BAC) levels reach 0.08 g/dL, the legal limit of intoxication. For women, this typically takes about 4 drinks, and for men, about 5. But, according to recent research estimates, it takes fewer drinks for children to reach these BAC levels. 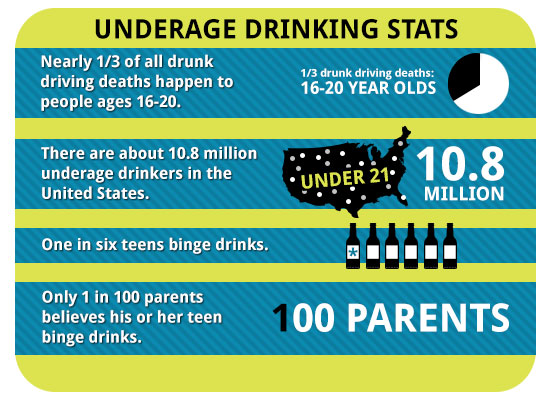 Why Do So Many Young People Drink?

As children mature, it is natural for them to assert their independence, seek new challenges, and try taking risks. Underage drinking is a risk that attracts many developing adolescents and teens. Many want to try alcohol, but often do not fully recognize its effects on their health and behavior. Other reasons young people drink alcohol include:

•  Peer pressure
•  Increased independence, or desire for it
•  Stress

In addition, many youth have easy access to alcohol. A 2013 study showed that more than 90 percent of adolescents ages 12-14 who drank alcohol got it for free the last time they drank. In many cases, adolescents have access to alcohol through family members, or find it at home.

Parents and peers can play a big role in shaping young people’s attitudes toward drinking. Parents in particular can have either a positive or negative influence.

Parents can help their children avoid alcohol problems by:

Research shows that children whose parents are actively involved in their lives are less likely to drink alcohol.

On the other hand, research shows that a child with a parent who binge drinks is much more likely to binge drink than a child whose parents do not binge drink.

Delaware’s Zero Tolerance Law for underage drinkers mirrors that of other states.  If you are under 21 years of age, as little as one drink can make it illegal for you to drive.

These are passages taken from the Delaware Drivers Manual, July 2016:

The law says that anyone under the age of 21 years, who drives, operates, or has actual physical control of a vehicle, an off-highway vehicle, or a moped while consuming or after having consumed alcoholic beverages, shall have his/her driver license revoked for a period of two months for the first offense and not less than six months nor more than 12 months for each subsequent offense. In order to reinstate driving privileges the driver must complete an education course as identified by the Delaware Evaluation and Referral Program and pay any associated fees. Once completion of the program has been verified, the driver must pay a DMV license reinstatement fee of $200.00. If the underage person does not have a driver license, the person shall be fined $200.00 for the first offense and not less than $400.00 nor more than $1,000.00 for each subsequent offense.

For Juveniles (not driving) arrested for consumption/possession of alcoholic beverages

Anyone under the age of 21 years who has alcoholic liquor in his/her possession or consumes alcoholic liquor, may have his/her Delaware driver license revoked for a period of 30 days for the first offense and not less than 90 days nor more than 180 days for each subsequent offense.

Law Pertaining To Juveniles Driving While Under The Influence

For a violation of the Delaware DUI law, the Family Court must submit an order to the Division of Motor Vehicles to revoke the license and/or driving privilege of any juvenile until such time as he/she is legally permitted to drink alcoholic beverages (21 years old).

Factors that teens should consider before they drink and drive are:

• The expense and hardship to your family.
• Your current/future employment may be jeopardized.
• Your insurance rates will significantly increase

About the Author: Guy Vanderlek